Founded by Mr Tan Teck Ann in 2005, KL Lab aims to be the one stop center for laboratory engineering supplies.
Click here to learn more... 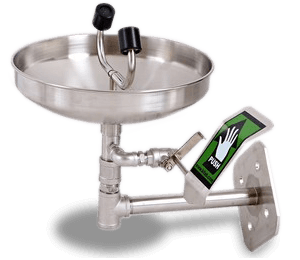 Emergency shower & Eyewash are essential to wash off on the spot contamination from accidents. In some jobs or work areas, the hazard may only happening limited to the worker's face and eyes. In this situation, an eyewash station is a device functioned as worker protection. Occasionally the worker may risk part or full body contact with a chemical. Emergency showers and eyewash stations provide on-the-spot decontamination which allows workers to flush away risky substances that can cause injury.

The combination unit of emergency shower and eyewash has the ability to flush any part of the body or entire body. It is the most protective device and useful in situations where a worker who were in extreme pain or shock from an injury which may not be able to follow directions. The first 10 – 15 seconds after exposure to hazardous substance is critical, any delay in treatment may cause serious injury. Emergency showers can also be used to extinguishing clothing fires or for flushing contaminants off clothing.